The Mystery of the Self: A Spectacularly Useful Illusion 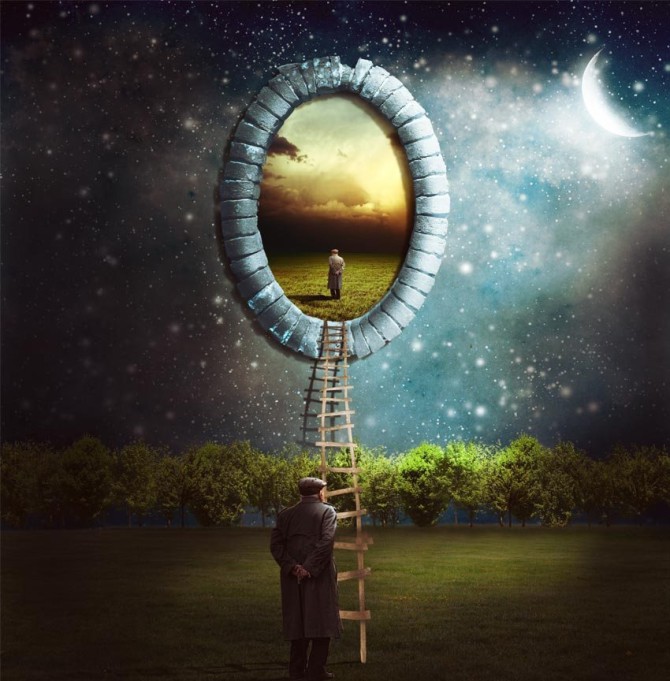 All we are ever doing in our pursuit of higher knowledge, of enlightenment, of understanding the self, is expanding the horizon of the unknown anyway. We are merely elevating ourselves to a “higher” level of not knowing, to a more erudite level of ignorance. The more we know, the more we realize how much we don’t know.

But not even that statement gets at the heart of the problem, because language is an exasperatingly imperfect tool. It just so happens to be the only tool we have to communicate our sense of self to each other (other than the more elusive “language older than words”). So healthy doubt seems to be the most reasonable course to follow, especially in regards to anything having to do with the all-too-precious concept of “I.” The problem of the self is a fascinatingly complex one.

Somewhere between “I doubt” and “I am” is an enormous abyss. This abyss is infinitely deep and infinitely wide, and yet, as with Zeno’s paradox, we can so easily leap from “I doubt” to “I am” and back again, as if the distance were nil. The illusion is that there is no distance, no gap, no abyss, but there most definitely is. It’s what Slavoj Žižek refers to as the Parallax Gap: the apparent displacement of an object/concept, caused by a change in observational position; which he breaks down into three main modes of parallax: the ontological parallax, the ultimate parallax that conditions our very access to reality; the scientific parallax, the irreducible gap between the phenomenal experience of reality and its scientific explanation, and the political parallax, the social antagonism that allows for no common ground. I won’t delve too deeply into these complex concepts, except to say that the ontological, scientific, and political parallax gap is the gaping abyss between “I doubt” and “I am.” All we have to do is become better at navigating this gap by building more robust bridges of communication.

Easier said than done. Here’s the thing: human evolution has brought about a modular brain, where a deep menagerie of selves have co-evolved to create a kind of conflict-resolution center that we call The Self. We have a multitude of evolutionary layers overlapping, like a giant onion in our skull. Each layer has an evolutionary importance of which we are just beginning to scratch the surface. But we do know that each module, each part of this infinitely fascinating organ, is a prerequisite for our being here.

Every module, whether outdated or not (and some are), is necessary for there to be such a thing as homo sapien sapien: an epiphenomenal animal that has the capacity to live an examined life. Something has to make the jump across the abyss. Something has to “do” the smelling/feeling/hearing/seeing/tasting/imagining. Like Julian Baggini wrote, “’I’ is a verb dressed as a noun.” Something has to be (verb) the being (noun) dressing/being (verb) itself (noun).

Something has to put it all together and say, “This is me.” And that something is the arbitrary Self. But that something is also an illusion, which is a tough pill to swallow for a creature that puts almost all its worth on being a self. Our perception of the self is as much a construct of a construct as it is an abstraction of an abstraction. And that’s okay. As Henry Miller memorably put it, “It is almost banal to say so yet it needs to be stressed continually: all is creation, all is change, all is flux, all is metamorphosis.”

We evolved this way for a reason: it has worked thus far. We perceive the self the way we do because our evolution required an “aspect” that was capable of putting the entire psychophysiological meat-spirit-package together into one single whole, into a kind of CEO of Mind Body & Soul Inc. And like most CEOs, the self has a tendency to take all the credit of the multifaceted corporation. But the self is not one single thing. It is not an essence, but a process.

It is the side-effect of an organism having gone through the motions of evolving. The sense of individuality that arises from this process is the illusion, but it is a most effective illusion. When we look in the mirror we perceive a single organism, which perpetuates the illusion. Perceptually we are one single entity, but actually we are several. We are multifaceted, complete with a plethora of masks. This psychophysiological unity of experience is who we are.

But that experience is forever in the throes of change, whether we are consciously aware of it or not. The more we embrace this change, the more we cycle and recycle through our many masks, the healthier we’ll tend to be and the more courageous we will become with our own vulnerability. The alternative, resisting change, just leads to furthering the illusion of the fixed self and perpetuating the illusion of invulnerability and false security. Like Peter Matthiessen said, “The armor of the “I” begins to form, the construction and desperate assertion of separate identity, the loneliness: Man has closed himself up, till he sees all things through the narrow chinks of his cavern.”

We transcend the “cavern” by realizing and accepting the fact that the self is an illusion and is constantly in flux and being okay with the inevitability of change. Defining ourselves may be like biting our own teeth, but it beats the alternative: having no sense of self at all. Having a sense of self, whether illusory or not, is extremely useful.

They preceded our preconditioning. With a robust sense of self we become capable of questioning our assumptions about the way the world works as well as the way the Self works. In The Elusive Self I wrote, “In the same way that a physicist cannot perceive both the momentum and location of an electron in space, an individual cannot perceive both the multiplicity and the continuity of the self. The concept of ‘I’ is elusive. Any attempt at perceiving it as a “thing in itself,” is akin to trying to eat our own face. Similarly, the concept of ‘now’, like the concept of ‘self’, cannot be located in time, for as soon as one declares a “now!” the moment has already become the past. As soon as one declares “I am myself,” the moment has passed and the self has changed.

Not only are we Creatures of Self in any given instant, we are Voyagers of Self eclipsing all ‘Now’s’. Just as there can never be a ‘now’, there can never be a ‘self’. And yet, paradoxically, perceptually, there is always a Now and there is always a Self.” Indeed, the paradox isn’t that we are part of an interdependent cosmos. The paradox is our perception of being independent from that interdependent cosmos. And yet here we are: independent, at least perceptually. And that must be okay.

The hypocrisy, the fallibility, the mistakes, and/or the false sense of ‘whatever’ that inevitably comes from such a paradoxical disposition must also be okay, because this is precisely our lot. Contradictory Creature is both who and what we are. We just need to find healthier and better ways of being so. An arduously Herculean task if ever there was one, but a task we must be able to embrace in order to become healthier versions of ourselves. Like Alan Watts said, “The self-conscious brain, like the self-conscious heart, is a disorder, and manifests itself in the acute feeling of separation between “I” and my experience.

The brain can only assume its proper behavior when consciousness is doing what it is designed for: not writhing and whirling to get out of present experience, but being effortlessly aware of it.” The philosophers’ maxim, “know thyself” may be impossible, but it’s impossible in the same way that enlightenment is impossible. We should neglect neither our pursuit of enlightenment nor the pursuit to know ourselves. We should instead strive toward both, while allowing the journey to be the thing.

The first step toward knowing our true self is questioning the conditioned self and then becoming our own self. As long as we can avoid becoming what F.S. Michaels calls “a ready-to-wear self,” or a conditioned self, we are free to proceed with our self-evolution in a healthier way. We are free to become – through constant self-overcoming – our most authentic self. And although, as Bruno Borges articulated, “The self is more distant than any star,” we become more ourselves by realizing that we are both intermittently individual-human and interdependent-star. Indeed, there is only one thing faster than the speed of light: human thought, and even more succinctly – human imagination.