THE SACRED POWER OF MENSTRUAL BLOOD 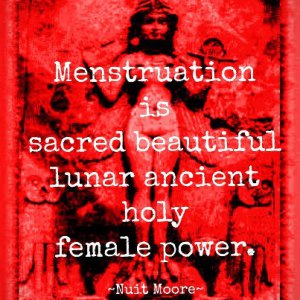 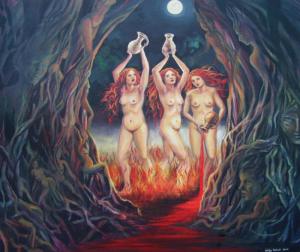 One of the most important rituals was preparing a ‘drink of immortality’ made from menstrual blood, which is full of healing stem cells, which can actually activate our cellular capacity to regenerate and transport us to endocrine states of rapture. Or in a spiritual sense open us to the Frequency of Love and Eternal Life, transporting us to another Dimension – called Heaven, Paradise, Nirvana etc.

This ‘Love Feast’ or ‘Sacred Marriage’ – a core part of the Menstrual Mysteries – was eventually declared a heresy and women were barred from participating in Christian rites.

However the ‘Power of Renewal, Rebirth, and Resurrection’ previously associated with the Holy Womb and Menstrual Blood of the Divine Mother was transferred to the story of Jesus and his ritual of Eucharist – ‘hic est sanguis meus – this is the Chalice of my Blood’ – where worshippers ‘drank his blood’ to gain the power of Rebirth through him.

In most ancient myths and religions, throughout the world dating back hundreds of thousands of years, the power of rebirth had always been a blessing of the Feminine Womb – embodied and gifted by Sacred Womb Priestesses across many cultures. It had never been held by a man. Although there are many legends about the ‘menstrual powers of female shamans’ being stolen by male gods.

The Holy Grail, in its true original essence, is the Womb.

Women born many, many thousands of years ago in what we might called ‘Original Innocence’ – before many of our genetic capabilities went offline, held this power naturally, as a birthright, shared with their tribes in renewal rituals.

Since those times, once the birthright was lost, women across many lineages and cultures – Womb Priestesses – have practiced many varied ways to heal, clear and open the Womb, so it can once again embody the frequency of Love, of Original Innocence, so that the energetic and physical stem cell capacity can activate purer states of consciousness and activate incredible regenerative healing. This knowledge has been almost lost over the last thousand years, as it has been fragmented, scattered and deliberately destroyed.

Menstrual_NightEarlier this year Fountain of Life met with a top international research scientist working with menstrual blood stem cells. His research indicated they had the capacity to work ‘miracles’. He described how the first time he used Menstrual Blood Stem Cells he felt like he had been ‘reborn’ – an unfit man in his late fifties, he’d had to run around the block because he had so much energy.

Another research scientist in his sixties working with stem cells had experienced his hair change from grey to the black of his youth in a matter of months. Throughout the world, in secret, these experiments are happening – in China, Russia, India, and more.

Whilst women are giving their power away to patriarchal ideologies, taking drugs to stop their menstrual cycle, using cancer-causing chemical bleached tampons to stem the flow, seeing their Menses as an inconvenient ‘curse’ they are ashamed of, male scientists around the world are using the power to experience states of physical and spiritual high.

Isn’t it time we reclaimed our Feminine power? Honoring the sacred regenerative properties of the ‘Flowering’ of our Wombs.

Evidence of the Sacredness of Menstruation throughout all cultures before the rise of the male-dominated patriarchy is well documented….

The Maoris stated explicitly that human souls are made of menstrual blood, which when retained in the womb ‘assumes human form and grows into a man

Africans said menstrual blood is ‘congealed to fashion a man’.

In Hindu theory as the Great Mother creates, her substances become thickened and forms a curd or clot. This was the way she gave birth to the cosmos, and women employ the same method on a smaller scale.

Indians of South America said all mankind was made of ‘moon blood’ in the beginning.

In ancient Mesopotamia, they believed the Great Goddess Ninhursag made mankind out of clay and infused with her “blood of life.”

Adam, from the feminine adamah, means “bloody clay.” The Bible’s story of Adam was lifted from an older female-oriented creation myth recounting the creation of man from clay and moonblood.

In the Koran’s creation story, it says that Allah “made man out of flowing blood”; but in pre-Islamic Arabia, Allah was the Goddess of creation, Al-Lat.

The Great Mother manifested herself as the spirit of creation (Kali-Maya). She ‘invited the gods to bath in the bloody tumblr_m41iiznUsn1ruq5t7o1_500flow of her womb and to drink of it; and the gods, in holy communion, drank of the fountain of life and rose to Heaven

‘hic est sanguis meus’ – ‘this is the Chalice of my Blood’ as spoken in the Christian Eucharist refers in origin to the menstrual blood of the Great Mother, not Christ.

The Norse god Thor reached the magic land of enlightenment and eternal life by bathing in a river filled with the menstrual blood of a ‘giantesses’ — that is of the Primal Matriarchs, the ‘Powerful Ones’.

Odin acquired supremacy by stealing and drinking the ‘wise blood’ from the triple cauldron in the womb of the Mother-Earth, the same Triple Goddess known as Kali-Maya in the southeast Asia.

Egyptian pharaohs became divine by ingesting ‘the blood of Isis,’ a soma-like ambrosia called sa. Its hieroglyphic sign was the same as the sign of the vulva, a yonic loop like the one on the ankh or Cross of Life. Painted red, this loop signified the female genital and the Gate of Heaven

The same elixir of immortality received the name of amrita in Persia. Sometimes it was called the Milk of the Mother Goddess, sometimes a fermented drink, sometimes sacred blood. It was always associated with the moon.

Celtic kings became gods by drinking the ‘red mead’ dispensed by the Fairy Queen, Mab, whose name was formerly Medhbh or “mead.” Thus she gave a drink of herself. A Celtic name of this fluid was dergflaith, meaning either “red ale” or “red sovereignty.” In Celtic Britain, to be stained with red meant to be chosen by the Goddess as king. Celtic ruadh meant both “red” and “royal.”

The communion wine drunk by witches was menstrual blood. The famous wizard Thomas Rhymer joined a witch cult under the tutelage of the Fairy Queen, who told him she had “a bottle of claret wine here in her lap,” and invited him to lay his head in her lap. Claret was the traditional drink of the kings and also a synonym for blood; its name literally meant ‘enlightenment.’

It is still specified in the Left Hand Rite of Tantra that the priestess impersonating the goddess must be menstruating, and after contact with her a man may perform rites that will make him “a great poet, a Lord of the World”

Taoists said a man could become immortal (or at least long-lived) by absorbing menstrual blood, called red yin juice, from a woman’s Mysterious Gateway, symbol of life-giving female energy. Chinese sages called this red juice the essence of Mother Earth, the yin principal that gives life to all things. They claimed the Yellow Emperor became a god by absorbing the yin juice of twelve hundred women.

Taoist China considered red a sacred color associated with women, blood, sexual potency, and creative power. White was the color of men, semen, passivity, and death. This was the Tantric Idea of male and female essences: the male principal is seen as ‘passive’ and as the female principal as ‘active’, the reverse of later patriarchal views.

The Maori rendered anything sacred by coloring it red, and calling the red color menstrual blood. Andaman Islanders thought blood-red paint a powerful medicine, and painted sick people red all over in an effort to cure them.

temple of bloodAncient tombs everywhere have shown the bones of the dead covered with red ochre. Sometimes everything in the tomb, including the walls, had the red color. J.D. Evans described a tomb on Malta filled reddened bones, which struck fear into the workmen who insisted the bones were covered with “fresh blood.”

Greek mystics were “born again” out of the river Styx, otherwise known as Alpha, “the Beginning.” This river wound seven times through the earth’s interior and emerged at a yonic shrine near the city of Clitor (Greek kleitoris) sacred to the Great Mother. Styx was the blood-stream from the earth’s vagina.

The Sufis, who also practiced Yoni Worship, associated female embodiment with red, and the male counterpart of ‘consciousness’ with white. Red and white colors alternated in the Sufi halka or magic circle, called the very hear of Sufism. The Arab rosary of alternating red and white beads had the same meaning: men and women coupled around the circle.

The rites were often governed by old women, due to the ancient belief that post-menopausal women were the wisest people because the permanently retained their “wise blood.”

url=https://deoscarosthemita.tk/post/20-How-To-Paragraphs says...
20 How To Paragraphs

url=https://www.aafrc.org/best-dog-seat-belt/#comment-240622 says...
How to get top marks on your resume

url=http://www.parlezvous.org/lt-colonel-cline/#comment-657783 says...
What to write a sales proposal

url=http://marksbrothersholdings.com/hello-world/#comment-15112 says...
How to write an argumentative essay by tim