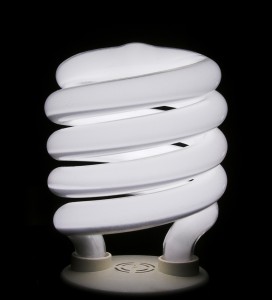 You see them in every grocery store and home center – those funny-looking curly compact fluorescent lights (CFLs) that are rapidly replacing the old round bulbs. And pretty soon, the Energy Independence and Security Act of 2007 kicks in, requiring bulbs to be 25 to 30 percent more efficient by 2012 to 2014, and 70 percent more efficient by 2020, effectively phasing out traditional incandescent bulbs as a way to save energy and reduce greenhouse gas emissions.

The energy efficiency of CFLs may be significant, but unlike traditional light bulbs, there is a hidden danger sealed inside each little bulb that requires special handling and disposal.

Mercury – a potent, developmental neurotoxin that can damage the brain, liver, kidneys and central nervous system. Infants and young children are particularly vulnerable to mercury’s toxic effects. Even at low levels, mercury is capable of causing a number of health problems including impair motor functioning, cognitive ability and emotional problems. Higher or prolonged exposure can result in much more serious health problems.

CFLs are marketed as “safe” and don’t pose any health risks as long as the glass remains intact. The danger comes if the bulbs are cracked, broken or not disposed of properly. Although it sounds like a miniscule amount – 4 to 5 milligrams – there is enough mercury in just one fluorescent light bulb to contaminate 6,000 gallons of water.

So what does that mean if a CFL is cracked or breaks in our homes, releasing mercury vapors in an enclosed area?

Consumers – especially those with young children –need to know what to do when a CFL breaks and the proper way to dispose of used bulbs. It’s no longer as easy as changing a light bulb.

Compact fluorescent light-bulbs contain very small amounts of mercury and care must be taken in disposing of them or when they break.

The EPA suggests the following:

o People and pets should immediately leave the room.

o Open a window and/or door and Air out the room for 5 to 10 minutes.

o If practical, continue to air out the room where the bulb was broken and leave the heating/air conditioning system shut off for several hours.

Also check out these frequently asked questions about CFLs below

All of this needs to be done to protect people from the tiny amount of mercury in one fluorescent light bulb. Which begs the question, are these lights really safe and are the risks worth it?

Another equally important concern is what happens to the environment – the air, soil and water – when tons of discarded bulbs, along with the mercury, are dumped into local landfills?

The threat posed by billions of broken CFLs lying in landfills has resulted in some communities requiring their citizens to discard used and broken CFLs in designated recycling centers or in a hazardous-waste collection facility.

Given the known deleterious effects caused by mercury, it would seem logical to assume there will be some unintended consequences resulting from the switch to compact fluorescent lights.

Only time will tell how significant those consequences will be.

If you are concerned about the possible health risks associated with CFLs, LED or halogen lights are good alternatives. Both cost a little more but are as efficient as CFLs and can be recycled easily.

For more information about mercury and compact fluorescent light bulbs go to http://www.epa.gov/cfl/

For information about your communities recycling program go to http://epa.gov/cfl/cflrecycling.html

Compact Fluorescent Lamps are designed to fit standard light sockets as an energy-saving alternative to traditional incandescent bulbs. CFLs have spiraling or elongated U-shaped tubes known as a single-envelope unit; the double-envelope or encapsulated bulbs have the tubes inside a glass bulb. Consumers should be aware of dangers associated with CFL bulbs before bringing the units into the home, school or workplace.

Although CFLs are considered extremely energy efficient, each bulb contains about 5mg “elemental mercury,” says U.S. Army-Ft. Wood. General Electric, a manufacturer of CFL bulbs, notes the amount equivalent to the tip of a ballpoint pen. GE further claims the mercury is an “essential, irreplaceable element” that allows the bulb to perform as an efficient light source, posing no danger during regular use. Elemental mercury is a bioaccumulative neurotoxin that effects multiple neurological responses. High exposures may affect the kidneys, lead to respiratory failure and death. In addition, mercury accumulates in the environment, vaporizing into the air and leaching into water supplies.

CFL bulbs are subject to scrutiny by the U.S. Food and Drug Administration as electronic products that emit ultraviolet radiation. However, as of May 2011, the FDA did not have “specific standards or annual reporting requirements” for manufacturers because the bulbs are considered of little concern, having insignificant levels of radiation. CFLs emit a small amount of UVA, UVB and infrared radiation, according to the FDA. The Australian Radiation Protection and Nuclear Safety Agency tested CFLs from various manufacturers. With the exception of people with photosensitive medical conditions, such as lupus, ARPANSA noted that CFLs are suitable for use at distances beyond 10 inches. However, when using desktop and other close lamps, it’s advisable to utilize double-envelope or encapsulated bulbs.

Electromagnet radiation, also known as electromagnetic frequencies — EMF — is a naturally occurring energy. Technological advances such as CFL bulbs have increased the EMF in modern environments. The electromagnet radiation bundle includes dirty electricity — sometimes called dirty power — electrical pollution and radio waves. Most of the EMF fields experienced every day and emitted from CFL bulbs are non-ionizing radiation and considered safe. However, for people with electrical sensitivity, CFL bulbs have significant accumulative dangers, according to ElectroSensitivity UK News