Understanding the 7 Layers of the Human Energy Field 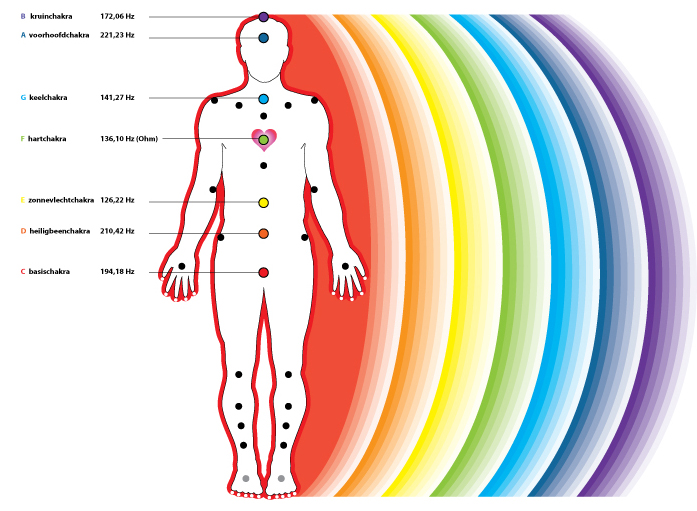 Often people refer to the ‘auric’ field or to the ‘astral body’, to creating in the ‘template layer’ of reality, and so on, possibly not realizing that these terms are actually referring to the many-layered nature of the interpenetrating fields of energy that make us up as the multi-dimensional human beings we are. While we can understand them as layers or as they are often called, ‘energy bodies’, they are all fully integrated expressions of the many facets of vibrational expression we embody. They are the sea of energy that we are.

The most commonly referred to chakras are the main 7 situated along the spine in the central energy channel of the body. There are however, many more chakras both above the head and below the body as well as secondary chakras found peripherally around the body. Each chakra is a dynamic energy center that both intakes and emanates energy, each processing energy from a distinct and synergistic perspective. These 7 immediate chakras could also be said to create or correlate to the 7 most immediate layers of the human energy field (the field of ‘nonphysical’ electromagnetic fields that surround the physical body). The first layer of the energy field is an emanation of or in correlation with the root chakra, the second layer is an expression of the second chakra, and so on. Just for the sake of zooming in a bit to what they look like and how they function, here is a breakdown of the 7 basic layers according to internationally renowned healer and human energy field pioneer, Barbara Ann Brennan, as described in her book Hands of Light: A Guide to Healing Through the Human Energy Field;

Etheric Body: First Layer- The word ether refers to the state between energy and matter. This layer is 2 inches or less beyond the physical form and it is a bluish-gray web-like structure which looks exactly like the physical body, except it is a web of energy moving in a wave-like motion. The structures of the physical body are a result of the pattern of the body instructed by this layer. It holds the physical form in place. It is possible to see this layer of the auric field as flashes of bluish-white light

The Mental Body: Third Layer- The third body of the auric field is the one which stages the phenomena of mental though processes. It appears as a yellow cloud surrounding the head and shoulders of a person, as well as the rest of the body. Just as the emotional body is a finer substance than the etheric, so too is the mental body comprised of a finer energetic substance than the emotional and etheric bodies. It emanates about 3 to 8 inches from the physical body but can expand when the person is engaging thought processes more intensely. Like the etheric body layer, it is structured. Within this body thought forms are visible. These shapes are also layered with various other colors which are emanations of the emotional body. The emotional body colors indicate the emotion that is attached to the thought form. When a thought is very focused and well formed, to the sight of someone with highly developed perception, these thought forms appear clearer. This clues us into the reality of how our thoughts become forms in our auric field which eventually trickle down in effect into our other bodily layers and thus our physical life.

The Astral Body: Fourth Layer- The fourth body of the auric field is a hub of transformation and transition. The lower three chakras and auric bodies are associated with the processes and functional energies of life in the physical world. The upper three chakras and auric bodies are oriented to our experiences and processes in the non-physical world. The heart center and the corresponding astral body, therefore, are the door through which the physical and nonphysical self are connected. The astral body is amorphous in form and, like the emotional body, hosts multicolored clouds of light in constant motion. It extends about one half to one foot from the physical body. These colors are more beautiful than the ones found in the emotional body and are also combined with a rose color associated with the state of love that is attributed to the heart chakra and love consciousness. This auric body is the one in which much non-physical interaction happens between people. To those with clairvoyant sight, auric phenomena can be observed between people appearing as blobs of color moving back and forth between people, often even when the people do not physically appear to be interacting. Perhaps if there is attraction or conflict between two people, these circumstances can be seen by the energy forms moving between the two people.

The Celestial Body: Sixth Layer- The celestial body, corresponding to the third eye chakra, is the center through which we experience ecstatic states of consciousness and universal love. It is the emotional body of the spiritual plane. Whereas the astral body and heart chakra are where love for humanity manifests, the celestial body, when connected to the astral body, is where a sense of universal unconditional love is realized. It is the point at which we remember our oneness with source, the light, and all existence. This layer is about two to two and three quarters feet around the body and is less dense and defined than the etheric template body. It is an emanation of gold-silver shine in an array of pastel type colors and has a light quality like the glow around a candle.

The Ketheric Template or Causal Body: Seventh Layer- The ketheric template body extends from about two and a half to three and a half feet around the body and encompasses a strong egg-like structure which allows the ketheric template to contain and protect all other bodies in the auric field. This layer is the last auric layer of the human energy body layers which is directly associated with a person’s life path in their current body incarnation. There are levels beyond the ketheric template, however they are associated more so with the ‘cosmic plane’- meaning that they are expansive beyond the scope of just the one physical life perspective. This auric body is like a resilient egg of extremely fast moving threads of golden light. The pulsations of these golden threads of light are so fast that is could appear, to clairvoyant senses, to shimmer. It holds the entire form of the aura together. This body facilitates the perspective of consciousness of knowing we are one with creator. It also contains imprints related to past lives and to the specific past lives being dealt with in the current incarnation. It is the mental body of the spiritual plane.

As aforementioned, these specific images, names and descriptions are those indicated by Barbara Ann Brennan and are from her book Hands of Light: A Guide to Healing Through the Human Energy Field. Brennan is a pioneer in the field of human energy existence. She began her career as a physicist for NASA and has spent her career involved in the mostly unprecedented study of the scientific understanding of human energetic being, functions, and phenomena as well as psychotherapeutic and extremely spiritually advanced methods of healing. This understanding of the seven layers or the seven auric bodies is obviously quite complex and advanced, useful primarily to professional healing practitioners. It is, though, a fascinating topic matter to become aware of, allowing us to remember that we are multifaceted light beings. When reading or contemplating this information, a door of perception is opened to layers of the self that may not be often consciously engaged.