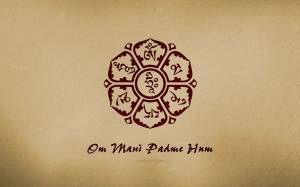 “All that is visible, clings to the invisible.” ~ Novalis The purifying and often debated mantra of Tibet: Om Mani Padme Hum is one of the most recognizable mantras in the world and appears in much religious Buddhist imagery, as well as the average chanting session for any beginner in their introduction to the world of meditation. But how much do we really understand its meaning? While in the West, the mythology of the Greeks and Romans, as well as Christian symbolism and theology may be more familiar, the origins of Eastern mythologies are much more mysterious to us until we actually visit a specific country or take a keen interest in one aspect of it. Even the word; Mantra, can be better understood from the root Man ‘to think’ (Greek, Menos, Latin, Mens) and the suffix Tra, which forms ‘tool’ words. According to the book – Foundations of Tibetan Mysticism, by Lama Anagarika Govinda, the mantra can be dissected and better understood as follows:

OM The seed-syllable of the universe, OM invokes the ever-present power of consciousness. In fact, it represents the all-encompassing consciousness, combining both sleep and waking consciousness that is experienced beyond words and thoughts on the forth dimension. OM is liberation, an opening up to the universe, a statement that one is ready to climb the first few rungs on the ladder towards enlightenment. This statement also extends to the claim that one will follow the path to be a Bodhisattva; cultivating what is good and swearing life-long service to helping others. ‘To awaken this consciousness was the life’s task of the Buddha.’ OM, being the first syllable in the Great Mantra, is not the ultimate goal, but the most fundamental. It is the ‘primordial sound of timeless reality’, that which resonates and reverberates within us in the timeless past, present and future.

MANI Often known as the jewel of the mantra, MANI represents the elixir of life or the gift of immortality. The Philosopher’s stone and the task of separating the object of the alchemist’s experiments from the base elements of matter; of earth, air, fire and water present a true problem for the Buddhist monk. For where do these four elements end? Where on this universe can we find the end of matter, or something perceivable lacking in these fundamental materials? The answer, the Buddha discovered, was in the purity and radiance of the true nature of the mind, in pure, universal consciousness. The kingdom of heaven or paradise itself can be found in such a syllable, and is often associated with the imagery of the diamond sceptre, or ‘Vajra’ in its three stages of unfolding. It represents the highest form of attainment, the jewel in the crown and may even lead to extraordinary powers, such as a prolonged earthly life. It is the transcendence of perception then; the realization that these tangible, sensual things are in fact figments of the mind and were an illusion in the first place. We need only master the highest form of alchemy and perform mind over matter, plunging ourselves into the seventh-class of consciousness and rise above the world of the senses into joy and bliss. It is the place where we become complete and the ‘I’ completely vanishes. It is the transformation ‘into the imperishable jewel of the adamantine mind.’

PADME The lotus blossoming is also a well-known image associated with Buddhism, and it is here, in PADME that we meet it. Not only are we like lotus flowers growing from the mud towards the light, but this journey also represents the many past lives we must incarnate in order to experience the full spectrum of human experience. Thus, through the many expressions of life come the various forms of approaching the light; from tantra to prana, shakti to shiva, the two dualities must exist in balance and full blossom in order to transcend. The female principle of Shakti, and raw power must join with the male principle of Shiva, and ‘resting in its own nature’ in a divine embrace before they can disappear. You might say we must pass through the many lessons of both genders before we can step outside of the seemingly endless cycle of Samsara. The divine union can also be seen as the fullest expression of creativity… As we know, it is this and only this that leads to the miracle of the conception of life, and it can be viewed like a bridge between the two polarities; an integration of raw energies. It is through this transcendence of dualities, much like the transcendence of the elements and matter in the previous syllable, that we find divine love and true self. The act of blossoming requires compassion, the liberation of the heart to pierce through the illusion of perception and the cycle of dualities; man and woman, night and day, life and death. For only then will all disappear and reunite with the Whole. HUM If OM is ascent to universality and a statement to say ‘come and get me!’, then HUM is the journey back down. One cannot be without the other; if OM is like the sun, then HUM is like the soil, a deeper experience and a completion of the cycle. ‘In the OM we open ourselves, in the HUM we give ourselves. OM is the door to knowledge,

HUM is the door to the realization of this knowledge in life. HUM is a sacrificial sound.’ It’s like the traveling of energies through the various chakras, though, in this instance, the energy travels to the heavens and back down again through the various channels in the body like lightning does when reconnecting with and being reabsorbed back into the earth. The yoga of inner fire in the seed syllable HUM can be represented by the symbol of the flame and transfiguration. But according to Tibetan Mysticism it is not the root chakra where the final part of the mantra vibrates and eventually tails off, but the heart, the centre of giving and love, where the first expressions of the Bodhisattva resound. HUM can also be likened to the Christian ‘Amen’, or other declarations of affirmation and has much more to do with Dakinis and the mandala of the knowledge-holding deities… All too lengthy a subject to go in to here. Needless to say HUM is the finishing line, that which vibrates out our intention to the universe before calling it back in for another round.