~*DIFFERENT SYMBOLS AND THERE MEANINGS *~... 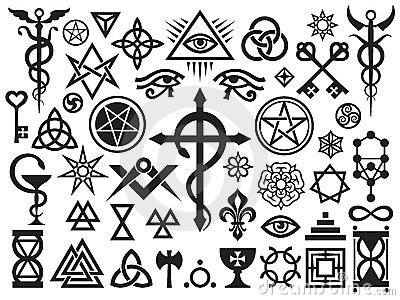 PENTAGRAM- Ancient time symbol of life. Representation,of earth,air,water,fire joining with spirit to create life. The wearing of the pentagram is mostly for protection and good health. If you hadn't noticed the average teaching of how to draw a star is actually a pentagram.

APPLES- When you cut an apple cross wise you can actually see,it reveals mother earths,own natural pentagram. Both of these are symbols of life.Protection of the pentagram is invoked in one way,by using the pentagram to draw out the sign of the cross. Beginning with the breast, with the right hand to the forehead,right breast,left shoulder,right shoulder,and back at the breast on the left.

This completes a cycle. The end is the beginning as the beginning is the end. This is a gate-less sign of protection. Also this was used way before Christians decided to use a four pointed cross to cross themselves.

DOUBLE PENTAGRAM- Represents the five stages of life for a woman's life. Birth,monarch,maternity,menopause ,and death. Double design it has represents,also her arms woven and inter-threaded, around this. This representation is of heaven and earth as one.

RINGED PENTAGRAM- Is representative of the male and female woven together as one to create perfect balance. This is considered harmonieous,and is still mystic in itself.

AIR- Represents the breath of life. It is also a male bridge between mind and body. You are considered restored to your original self with each breathe you take. Hope is a rest,dependent on breathing in breath. Air is also revered the life of spirit.

EARTH- She is revered as the heart beat. She also represents the circle of life. [east,south,west,and north]. Life is as below as it is above. This represents,equality,earth should be honored not ever wasted.She represents being responsible to care for someone other then yourself.

Fire- Is considered the heart of all of the people. Fire offers cleansing,and renewal. It's believed out of ashes comes new belief and ideas. Fire provides the glow that creates the color spectrum.

Such as candles sparkles ,and colors. Fire is revered by witches for the brightness,as to be their beacons.Smoke from fire carries our wishes and or prayers to our ancestors for us. Fire is also deemed the eternal witness,in ceremonies too. The only request of fire is to not be misused.

PLANTS- Symbolized for most transformation. This is for one reason because they can be used for healing and of use to us in all other ways. Roots equal past,Trunks equal and represent life force in general. Branches are representative of goals. Fruits and flowers,are used to represent completion of the goal.

WATER- Revered for cleansing the soul.When rain falls it is thought to be cleansing the earth,and purifying the land. When air breathes we as people live to breath another day. As water oxygenates,individual for the air. Examples,lakes rivers streams, seas , oceans,brooks,lagoons ,wetlands,waterfalls ,and water sheds. Is revered liquid magic. Clean soothing ,and clear. Ice ,snow ,sleet,darkness,thickness,waves and motions. Water is revered female. mist fog clouds. Water shapes the world ,and the body within it. Water is honored,This is the reason it is said that we will never thirst for life and love ,it is a given. Water has its own spirit,this is why tears cleanse our souls.

ALL SEEING EYE- Representative of ,spirituality,sight,inner-vision, and higher knowledge.

THE OLD BELIEF IS THAT THIS WOULD CAST EVIL OR CURSE,OR BAD LUCK ,OR EVEN LOSS POSSIBLE DEATH ON YOU. The all seeing eye is a distortion,of the omniscient. Now days Wiccans for the most revere it to protect against evil or other bad magic or curses.

ALCHEMY- The simple 17th century sign revered as the combing of the geometric shape.

Elemental symbols ,and astrological signs. Each part represents the magical elements,and any foreseeing needed for magic work. In a quest for immortality,and spiritual elimination. This is rooted form the magic called kabbala.

ANARCHY- Too many Satanist,and faster growing darker occults groups. This is a representation of some of these groups slogans. " DO WHAT THAT WILT", It represents ASMODEOUS a demonic force,that drives people ,mostly young teens, to perversions or suicide. So this is believed by some.

AMULET- Magic charm,anything to ward off bad luck or evil . Illnesses and even wards against accidents if done right. Some amulets if made correctly can ward off other ill intended witches.

ANKH- A symbol of an Egyptian cross representing eternal life.life giving power of the sun and rebirth.

ANGELS- Representation,of good and evil ,through out the world, do to the angel ,and fallen angel beliefs. Different faiths,beliefs,paths,and occults,their angels and beliefs and what they look like differ for each variation in choice of belief.

ARROWS-Is a symbol,of the archer. Part of the zodiac. History shows its representation of ,war,power,rays of the sun, swiftness, and knowledge. Deities,like the Greek god,APOLLO,

The goddess ARTEMIS. Hindu believe it to be part of the symbol of the weather god for them.

Also associated with the god of sexual attraction EROS,cupid,Roman god KAMA. Cheyenne warriors revered it as a sacred medicine arrow as a symbol of male power. Arrows held by a skeleton,are revered to the majestic to point out death or even disease, or both. Most of the time these days they are more so used to point out a desired destination.

CHRYSTAL BALLS- Mostly used for the purpose of divination in magic. When used correct. Also

known for fortune telling,scrying,and clairvoyance. When heavy crystal balls became expensive,witches,started using glass ball fishing floats. colored glass balls,and even for some mirrors. that have been cast to be magic. Some even say they use crystal balls to do psychic

BAT-In the east this symbol is revered for good fortune. Mid-evil times revered it to be a symbol of evil,demons,and spirits.

BELL WITCH SYMBOL- Five points combined,symbol with a triangle as the central part facing down.

5 lines resemble a man with arms outstretched,and legs. Outstretched within a sacred or private circle. A pentagram is usually in the back ground. This is a mid-evil charm used by wizards and alchemist.

BUTTERFLY-For Christians,this is a reminder of transformation that takes place,through what they revere gods redemption. To pagans its mythical meaning is as being linked to the soul of the deceased,awaiting and looking for reincarnation.

SACRED BULL- Mostly revered as an Egyptians,idol. This being one of the manifestations of what they revere god. Meaning for being revived. We have chosen a smaller bull with horns,resembling a crescent moon,which is revered for the meaning divine. light/dark,sun/moon,life/death,and male/female.

CADUCEUOS- This word means staff of Hermes. The symbol dates back all the way to the Greek god Hermes.[messenger to god]. To Romans,he is revered mercury. To divine natural healers this is related to the energy center [ckakras]. The two serpents wrapped around the staff stands for negative and positive the same as equal.

CHAOS- Self taught occult,as a newly teaching is ,as meant the opposite of order. Since this belief in this symbol,changes everything. There is only a quest for pleasure for them left behind.An 8 pointed star,represents many directions of chaos. There are ways to follow this occultist belief. they warship angels/demons.

CIRCLE-Universal and ancient,this is a symbol of unity.wholeness. infinity of the goddess,the circle is considered female of power of the sun. To most pagans this represents the powerful force of feminine spirit. Also the cosmos. Spiritualist. Mother earth,and symbolizes sacred space.

CIRCUMPUNCT- This is a circle with a dot. This represents a sun god ,first payed homage to in Egypt,it was made of gold. It is also revered to show the emotional state of free masons. Also goes for the creative spark of divine consciousness within people. It has has also represented the universal joining of man of universal gods. [in that belief or path it makes everyone in the world co creators.]. In Hinduism ,and Buddhism,the Bindi [dot] represents [male force]. Together the circle and the bindi dot joined together,represents the joining of male and female forces together.

Also known as the basic elements. EARTH ,AIR WATER ,AND FIRE. Natives believe this is the

basic line that represents their sacred medicine wheel. For them this plays a major role in their spiritual,rituals. Many tradition pagans consider it their main symbol,for transformation of the goddess's energy. Churches even use a variation of it they call it the Celtic cross.

DRAGON- A mythical creature,believed to be made form many different animals. Animals such as serpents,lions,lizards,and birds,to name a few. All these animals combined are what is said to make this creature up. From being said to have more then one head all the way to breathing fire.To mid-evil Europe they where thought to be evil,and dangerous. Most eastern Asians believe,dragons

to keep them and others safe from evil spirits. Some beliefs try to say a dragon represents,Lucifer,and his evil.

ELEMENTS-Four basics pagans believe,those to be earth,air,water,fire These first two are considered passive feminine. The second two are considered active ,masculine. In Wicca and native American cultures,The quarter wheel is representative of the medicine wheel. Sacred places ,and sacred earth ,both cultures agree on this.both pagan and native American. The four lines represent

EVIL EYE- Symbol of a fabled dreadful curse,that was said to cause,bad luck,loss, and even death.

In many cultures in this world ,this is revered a very scary symbol. The symbol shape varies through out each culture. Pagans present day for most revere the evil eye as a way to protect against evil,or bad intent. Also that it is believed to ward off evil spirits ,and hold bad curses at bay.

url=http://profly.su/products/phantom-4-pro-v2#comment_22270 says...
The guide to analyze a business process