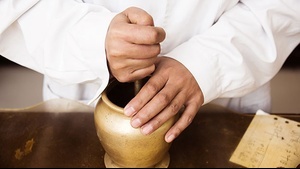 An obscure Chinese herb with a powerfully bizarre name has been identified as a potential cure for one of the deadliest forms of cancer.

Two thirds of people with pancreatic cancer — including legendary Nine news reporter Peter Harvey — die within the first year of diagnosis due to its aggressive cell replication and tumour growth.

Doctors believe the protein GRP78 is key in pancreatic cancer because it helps the cells survive and thrive.

Now researchers at the University of Minnesota have found that triptolide, an extract from the herb 'thunder god vine', can suppress the protein and ultimately kill the cells.

Dr Mehrdad Nikfarjam, a Melbourne pancreas surgeon and chairman of Pancare told ninemsn that this extract has had dramatic results in animal studies but now human trials need to be conducted to see if it has the same affect.

"Triptolide is a bit tricky because it's not that water soluble, so it's not something you can consume and expect it to have a cancer-fighting effect," he said.

"You would want it in a formulation to take orally or intravenously. It's not something that would be ready for human use in its current form."

Dr Nikfarjam said a lot of current drugs were derived from herbs from Chinese medicines but have been extracted and manipulated to make them more effective.

Many patients choose to try alternative medicines but often the scientific evidence for their success is limited.

"In the medical field, we do hear of patients trying remedies and treatments overseas and come back having had good results. But from a scientific point of view, we don't know if they would have got better anyway," Dr Nikfarjam said.

"Some treatments may be of some benefit, but they haven't been vigorously tested because the cost of those studies to test them is very high and at the end of the day there may be no market value for doing it.

"This may be an opportunity for not-for-profit or philanthropy groups to fund testing of drugs and substances that would not really get to be tested by other ways."

He said more work is desperately needed for pancreatic cancer because by 2020 it is predicted to be the leading cause of oncological deaths in Australia after lung cancer.

Dr Nikfarjam added that patients should always advise their doctor if they are trying alternative therapies.

"Some of these medications can make chemotherapy more toxic," he said.

The study was published in the American Journal of Physiology — Gastrointestinal and Liver Physiology.