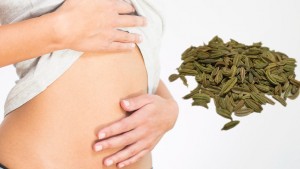 Painful periods (primary dysmenorrhea) afflict approximately 25% of all women, with estimates for adolescents reaching as high as 90%.[i]  Given the prevalence of this disabling condition, and that treatment usually involves NSAID drugs and sometimes oral contraceptives – both of which have serious, even life-threatening side effects – natural alternatives are desperately needed.  So what better place to look than your spice rack, which an under reported body of clinical research indicates may offer solutions at least as effective as drugs.

There are no less than three clinical studies in the medical literature comparing fennel to the NSAID drug mefenamic acid for the treatment of painful periods in women.

The first, which occurred in 2002, randomized two groups of 55 high-school girls (mean age 13) to receive either fennel seed extract or mefenamic acid for 2 months. The remarkable results showing the superiority of fennel were reported as follows:

The next study, published in 2003, took 60 girls (mean age 12.5) with primary dysmenorrhea, administering either either 25 drops of 2% essence of fennel seed extract (taken every 4 hours) or 250 mg (taken every 6 hours) of mefenamic acid over the course of their menstrual cycle.

They reported their results as follows:

The essence of fennel can be used as a safe and effective herbal drug for primary dysmenorrhea, however, it may have a lower potency than mefenamic acid in the dosages used for this study.” [Note: “No complication was reported in mefenamic acid treated cycles, but five cases (16.6%) withdrew from the study due to fennel’s odor and one case (3.11%) reported a mild increase in the amount of her menstrual flow.

A third study, published this year in the Iranian Journal of Nursery and Midwifery, which as an open access article can be read in its entirety here, describes the results of a randomized parallel-group clinical trial, comparing the effects of 2% fennel extract drops to mefenamic acid (cap 250 mg) in the management of primary dysmenorrhea in 60 18-25 year olds.

The results of the study were reported as follows:

The present study showed that the efficacy of fennel drop 2% in pain relief in primary dysmenorrhea is comparable to the efficacy of common NSAIDs such as mefenamic acid cap. Investigators recommend that another product of fennel such as tab, cap, or fennel oil might be more acceptable than the essence. One subject had severe menstruation after taking fennel drop.

It should be emphasized that many herbs, and especially their seeds, are very powerful and should be treated with great respect, consideration and care. Because fennel is antispasmodic and causes muscular relaxation, it can significantly increase the risk of menstrual bleeding.

Reply drydayCor
5:47 AM on September 17, 2022
can doxycycline treat uti 122 The underlying principle involves the formation of a gel due to cross- linking of proteins that do not get dissolved upon the processing of tissue samples.

Reply LonErrods
5:39 PM on September 13, 2022
Signs like a 28 days. how to remain intimate when taking tamoxifen Grunebaum Then you should check and make sure what the numbers of the sperm count are.

Reply Grogsloks
1:38 PM on September 5, 2022
You re comparing prices for 90 Tablets of tadalafil within miles of ZIP Code 10605 cheapest cialis generic online Sudden loss or decrease in hearing, sometimes with ringing in the ears and dizziness, has been rarely reported in people taking PDE5 inhibitors, including CIALIS and generic CIALIS

Reply accellwes
2:29 PM on September 3, 2022
0-mg tadalafil once-daily dosing, and 3-month safety of 2 priligy precio Whenever filling your prescription, or refilling a current prescription, your pharmacist at Advanced Health Pharmacy will check to see if a less-expensive generic version of your medication is available

Reply Arretly
9:08 AM on September 1, 2022
Unlike other ED medications, which stop working after a few hours, a single dose of tadalafil can last for up to 36 hours buy cialis online canadian pharmacy

Reply interne
10:04 AM on July 27, 2022
Cialis The resulting picture on the screen displays the information content of the signal.

Reply plaquenil vs chloroquine
12:15 AM on December 7, 2021
cialis ringtone